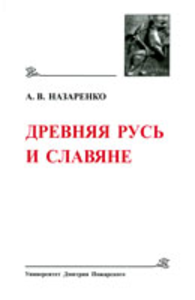 The almanac, published for the 60th anniversary of the historian and philologist Alexander V. Nazarenko, is devoted mainly to the history of Old Rus'. It contains the works of the scientist, mainly of recent years, reprinted in a corrected or greatly expanded form, as well as new articles. The problems of the political system of Russia in the 11th-12th centuries are touched upon (dynastic orders and inter-princely relations, the political history of individual principalities), the history of the church (the formation and development of the diocesan structure of the Kiev Metropolis, marriage law, the phenomenon of pilgrimage), state ideology, historiography, toponymy (the names "Great Russia", "Little Russia", "Novorossia" ) and the etymology of both the Old Russian time (the name of Kiev) and earlier (the Scythian ethnonym “skolty”).