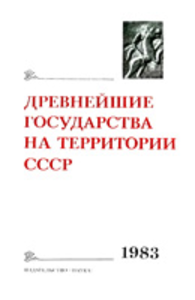 The next issue of the almanac contains a monographic study by Aleksander V. Podosinov "Ovid and the Black Sea Region: the Experience of Source Analysis of a Poetic Text". The author sums up his long-term study of the works of the great Roman poet, considered as a source on the history of the Northern and North-Western Black Sea region, outlines the method of source study of poetic monuments. The almanac also includes several articles on the history and source studies of the most earliest states on the territory of the USSR, reviews and a chronicle of the scientific life of the sector of the history of the most ancient states of the Institute of History of the USSR of the USSR Academy of Sciences.