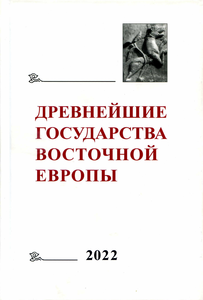 The next volume of the almanac "The Earliest States of Eastern Europe" is devoted to the role of religion in the formation of socio-cultural practices and ideas. This problem is revealed on the material of European and Asian societies of Antiquity and the Middle Ages, including Eastern Europe and Old Rus'. The volume consists of two parts. The first contains articles on issues related to the Christianization of a number of countries and missionary activities in them, the role of priests in their political life. The second part of the volume publishes archival materials by Galina V. Glazyrina (1952–2016), including her translations of the Old Norse Eiriks saga vióforla, Þorvalds þáttur víðförla (two editions), Kristni saga (initial chapters) . Translations of texts are accompanied by comments, as well as introductory articles containing a description of these sources. The materials for this part were prepared by Tatyana N. Jackson. The publication is intended for a wide range of historians and philologists, medievalists and Slavic scholars, as well as all those interested in the history and culture of Eastern Europe and Islamic countries.