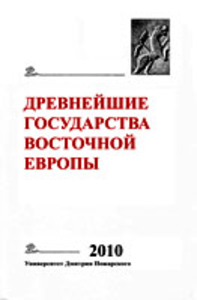 This volume of the almanac "The Earliest States of Eastern Europe" is devoted to the actual problems of the emergence of the Old Russian state, studied on the basis of both written sources and archaeological materials. Using the methods of political anthropology, the main stages of the formation of statehood among the Eastern Slavs and the level of development of the Eastern Slavic communities on the eve of the formation of the state are highlighted. Particular attention is paid to one of the aspects of the infrastructure of the Old Russian state - the formation of a system of military-administrative centers through which power was exercised. The ways of state formation among the peoples neighboring with Russia are also considered. An independent problem is the emergence of written culture and understanding in it the era of the formation of the state.