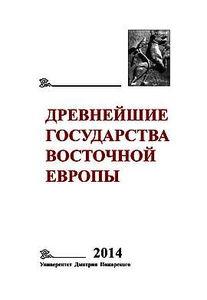 The almanac "The Earliest States of Eastern Europe" for 2014 is devoted to the problem of the emergence and formation of early medieval states. It mainly includes reports read at the international conference "Old Rus' and Medieval Europe: the emergence of states" (Institute of General History of the Russian Academy of Sciences, 2012). The main objectives of this volume are to present the general theoretical state of modern studies of early states and highlight the history of specific state formations in Europe, including Old Rus'. The volume discusses the role of migration in the processes of the emergence of the state, large-scale construction, the transformation of the status of the ruler, the formation of state institutions. Reviews of the ways of formation of states in Bulgaria, Pomorie, Russia are presented. The role of international relations in the formation of the Old Russian state is emphasized. A separate block of articles is devoted to medieval Kherson in the context of the history of Byzantium and the Black Sea region. Written from different theoretical positions, published articles demonstrate the variety of processes that caused the emergence of different medieval states, and various forms of their socio-political organization.